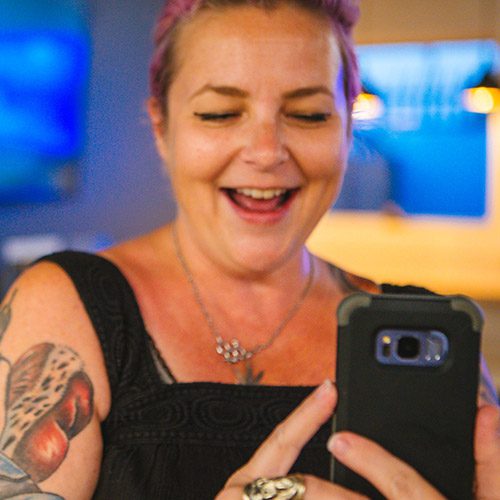 After several years as a High School Spanish teacher in Upstate New York, Amy Donohue moved to Phoenix in September 2002, and started her stand-up comedy career soon after. From there, she was a radio DJ for four years on KWSS 93.9FM.

A shameless self-promoter, she created a great fanbase on Myspace. As people went to her comedy shows and listened to her radio show, she realized the value in doing Social Media the right way: by being social. In 2005, she made her first $50 helping a small business create a profile on Myspace.

In 2011, Amy donated a kidney to a Twitter follower’s mom. This wouldn’t have happened had she not used Twitter the right way: to build relationships.

Amy was one of the first members of the Phoenix chapter of Women Grow, and consulted on the Prop 205 campaign. She is a co-founder of Hybrid Social, and also co-found Cannafriends, an Arizona cannabis networking group. Amy has been a member of MITA (Marijuana Industry Trade Assoc in Arizona) for five years. Amy also volunteers as a penpal for The Last Prisoner Project. In 2021, Amy and business partners launched Hoi Polloi Advisors, a hemp, cannabis, and psilocybin business advisory group.

She has been interviewed for multiple cannabis publications, as well as writing for Dope Magazine in 2016. In 2019, Amy spoke twice at MJBizCon, regarding social media compliance in the cannabis industry.