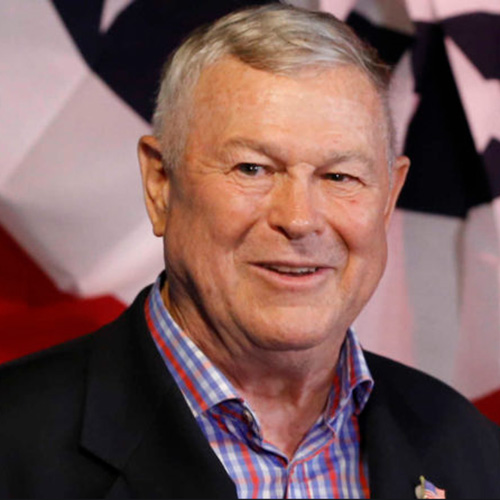 Dana Rohrabacher’s motto is FIGHTING FOR FREEDOM AND HAVING FUN. His life story reflects the commitment of an activist to make a difference and that is what he always did. His early years and inclinations were shaped by the Cold War. To Dana it was an historic fight between good and evil. He made unique contributions to the triumph over Communism that ended four decades of conflict. It was, in his perspective, a victory not for the United States but a victory for freedom.

Dana started as a youth organizer in Ronald Reagan’s first campaign for governor. He earned a B.A. from California State University at Long Beach and his M.A. from the University of Southern California (USC). He is an Eagle Scout. After college he worked as a reporter for a news service in Southern California and a few years later he was then hired to be the Assistant Press Secretary of Ronald Reagan’s Presidential campaign. Once Reagan won, he brought Dana with him to the White House as a senior speechwriter and special assistant to the President.

For seven years Dana was the most prolific of the President’s writers He was known for playing a key role in developing and launching the Reagan Doctrine which had the United States supporting pro-freedom and anti-communist insurgencies worldwide. He also worked with President Reagan on science, space related and economic related issues. But he is most proud of the role he played in Reagan’s Historic “tear down this wall“ speech in Berlin. Dana didn’t write it, but he was the one who smuggled it directly to President Reagan.

In 1988, Dana left the Reagan White House and moved back to his home turf in Southern California in order to run for a Congressional seat. No one thought he could win. He proved the experts wrong and won his seat in the United States House of Representatives by a landslide. Then for the next 30 years he continued to be reelected by sizable margins.

In Congress, Dana is recognized for authoring the 2004 Space Commercialization Act, being the key proponent of the X-37B Space Maneuvering Vehicle, his long-fought battle to protect the patent rights of inventors, maneuvering legislation signed into law establishing a Memorial for the Victims of Communism in Washington, DC. One of his greatest legislative victories was, after years of trying, he rallied support for his Rohrabacher/Farr amendment which prohibited federal authorities from superseding states’ laws in those states that legalized medical marijuana. He is the father of CANNABIS FREEDOM. In addition, he co-sponsored legislation that would legalize adult use of cannabis.

After being elected, but prior to being sworn into Congress Dana travelled clandestinely into Afghanistan and joined with a Mujahedeen unit to observe the practical workings of policy he had advocated. His personal actions in Afghanistan were consistent with his earlier first-hand experiences conflicts in Vanuatu, Vietnam (1967) and Czechoslovakia (1968) and in several other geopolitical Conflicts.

As avid surfers and nature enthusiasts, he and his wife Rhonda and their 15 year old triplets recently moved from southern California to southern coastal Maine. After 30 years in the House of Representatives Dana is now using his working knowledge of people and process to further projects and policies that are consistent with his belief in freedom and are in the interest of the American people. He has written several screenplays and is working on a book of his adventurous life. He is also a guest commentator and consultant and advises cannabis companies.